An office block was being converted into flats in St Albans and Vanda Coatings was the company chosen for the window frame recoating. The main construction work such as stud partitioning had taken place before most of the refurbishment was completed. All the work we did on this building site in St Albans was carried out around trades such as central heating fitters, electricians, tillers, floor layers and carpenters fitting kitchens.

We were asked to recoat framework on the exterior and interior of the building on the ground, first and second floor of this property. There were at least 10 windows per floor, but the number of windows on each floor varied. The size of each window also differed and some large windows had 3 frames within them.

With any substantial project all trades have to work around each other as directed by the site manager, so in the case of St Albans at one point the scaffolding had to come down on one elevation to enable the Water Board to dig up the road. While the scaffolding was up our Vanda Coatings teams painted the exterior of the aluminium windows and before this they did some work on the inside.

Plasterers had been at work on the interior before Vanda went inside, so there was quite a lot of moisture seeping out from the wet plaster which made the windows damp. A surface needs to be dry for a coating to adhere to it, so our operatives used a humidifier to reduce the amount of vapour condensing on the windows and making the substrate wet. The humidifier was left on overnight and the metal window frames were dry enough to be coated the next day.

Plaster also had to be scraped off from the surfaces before the job of painting them could begin. All the frames were then rubbed down using p240 wet and dry sandpaper. This stage in the preparation was followed by washing down the rubber beading around the glass with a cleaning agent. All areas that our team didn’t want to be painted were masked off and after cleaning the surfaces with thinners, they were primed with an 850 primer. The chosen top coat was RAL 9010 and after our Vanda operatives had spray painted this gleaming white finish onto the frames the masking was removed.

We pride ourselves on the high standard of our smooth finishes. Consequently, we were perfect for the window frame recoating as a crucial part of the refurbishment especially as some of these high end apartments were to be sold for around £500,000. 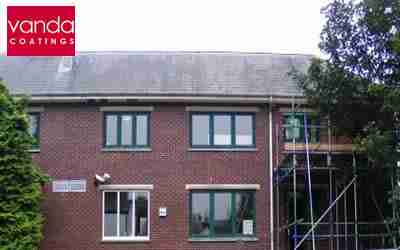 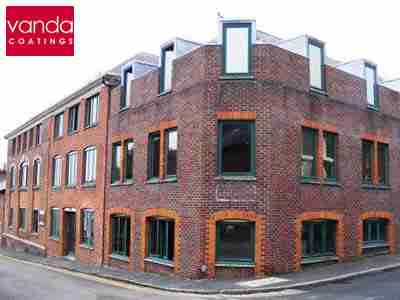