The public research university, King’s College London was named as such following a royal charter given by King George IV in 1829 and we were asked to participate in the extensive refurbishment of their premises. The small part we played involved spray painting the exterior of their generator.

A sudden lack of power in a large building such as King’s College London could pose huge health and safety problems regarding lifts, fire protection mechanisms and other systems. Consequently a back-up generator is designed to kick in within seconds of a power failure.

The gun metal grey, diesel standby generator for King’s College London had suffered knocks and scratches and was in a poor state. This is partly because it is housed outside on the 6th floor and exposed to the elements. As there wasn’t a lift, our team had to carry all their paint spraying equipment up and down the stairs, but luckily they are as strong as ox’s!

The whole of King’s College London was being refurbished, so there were other trades on the site, however the roof was isolated which enabled the Vanda sprayers to work without interruption. This meant that the project could take place during normal working hours (after a day of induction before being let onsite).

Health and safety is paramount in every project our team is involved in and in this case the generator was live, but offline. They couldn’t take the risk of it powering up as it would have been too dangerous while the team were working on it. Initially, the whole surface had to be sanded with the use of orbital sanders to get it all back flat. This was followed by coats of high build primer and a two pack top coat. The specialist top coat used for spray painting the exterior of the generator had a chemically induced hardener which had to be mixed into the paint before spray applying it. Timing was important at this stage. The final layer was lacquer which gave the generator the finish the client required. 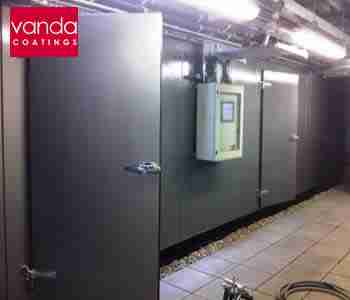 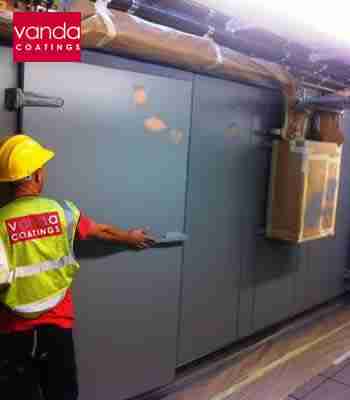