A signage spraying project completed. A new Community Centre has replaced the old premises on Canal Park in Cardiff and this three story building includes a crèche, two halls, meeting rooms and a day centre as well as offices. Once funding was granted, Butetown Community Centre was built by Vinci Construction in accordance to high environmental standards. Funding was also provided for signage on the building that was especially designed in Scotland. Unfortunately, when the sign was installed on the exterior of the Community Centre, the locals thought that the lettering was unclear because it seemed to be too similar to the background of the signage.

A member of the Vanda Coatings team took a swatch to the community centre and a dark blue was chosen by the Butetown Community Association. As part of the preparation before re-coating the signage, Vanda Coatings masked the area around the lettering to protect it from overspray as can be seen on the top right photo. The more prominent blue lettering can be seen in the bottom, right photo. 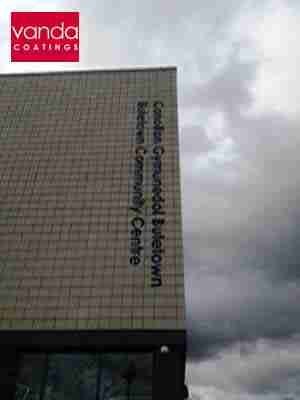 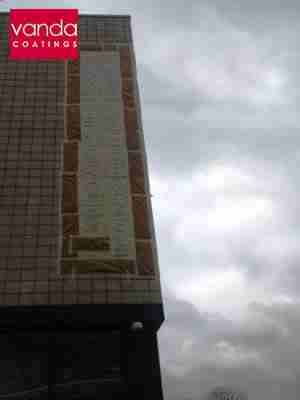