Since Greggs opened their first bakery in 1952 they have expanded to become the biggest chain of bakeries in the UK boasting 1,671 shops and employing 20,000 people.

Good quality products at affordable prices have contributed to the success of this household name, however recently Greggs announced that they were expecting their profits to be slightly lower than usual this year which led to their shares falling to their lowest level in 3 years. Bad weather and rival companies have kept sales down as customers shop around in these hard economic times.

They are not alone in seeing a decline in sales. Other highly successful retail outlets have suffered during the recession and Vanda Coatings have helped many of these companies improve the appearance of their stores in order to increase footfall on the high street. Re-branding is a positive move in a bid to rejuvenate consumer interest and stave off competition. Of course, a simple way of refreshing a brand as well as making premises more visually appealing is by painting a shopfront.

Greggs have made the positive decision to paint their shopfronts to revitalise their brand. Embarking on a rollout programme to rebrand certain outlets of Greggs is a huge task, but Vanda Coatings are meeting the challenge having already re-sprayed many of their shopfronts throughout the UK. As can be seen on the top right photo, the shopfront of Greggs in Eltham, London needed refurbishing.

The Vanda Coatings team prepared the substrate and masked off the areas that were not to be coated. The bottom right photo shows that the whole shopfront was then painted a uniform grey in order to smarten up the appearance of the shop as well as fitting in with the whole re-brand roll out programme. 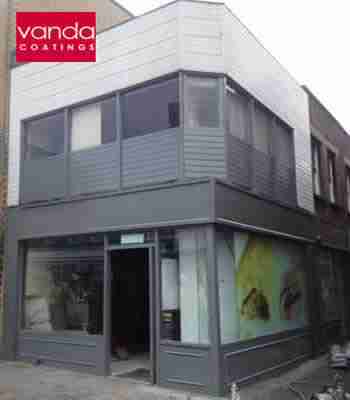 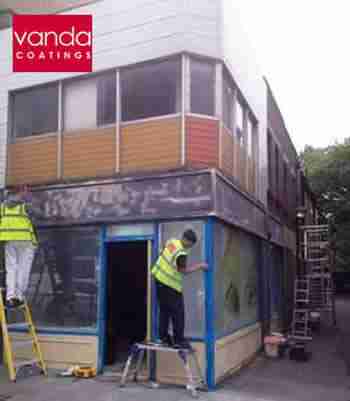