Vanda Coatings were called in for roller shutter re-coating of the Co-operative pharmacy in Renfrewshire in Scotland. The roller shutter looked in a bad state even though the mechanism was still functioning perfectly, so all that was needed was a re-spray to restore it. The Co-operative regularly invest in refurbishment because they know that this saves money in the long run. If metal items are left to deteriorate for too long, replacement then becomes the only option whereas preventing degeneration makes better financial sense.

The Co-operative Group consists of an array of retailers including banks, food stores and pharmacies with over 100,000 employees throughout the UK. Over eight million members run the group and have a say in its ethical stance which has attracted customers to its services over the years. Originally established in 1844, the Rochdale Society of Equitable Pioneers consisted of co-operative societies who shared out profits to the people involved and this approach still stands.

Roller shutters are a necessary part of most shopfronts as a method of protecting the shop exterior from environmental forces such as rain, dirt and break-ins. Even though they are used when the shop is shut, their appearance can reflect badly on the business if the rollers hutters are in a poor state of repair. Furthermore, people are less likely to treat premises with respect if the owners of a business seem not to look after it properly. Consequently, most shop owners have their roller shutters re-sprayed when the original coating chips, flakes off, fades or when a colour change is needed for re-branding.

As part of the Co-operative’s refurbishment roll out programme, Vanda Coatings have re-sprayed various co-operative pharmacies across the UK including Stalybridge in Greater Manchester, Accrington in Lancashire and Erskine in Renfrewshire, Scotland. As well as re-spraying roller shutters, we have spray painted all aspects of aluminium framework on shop fronts both inside and out.

The bottom right photo shows one of the roller shutters in a bad condition with many black marks where the paint has been eroded away as well as rust damage. The result of roller shutter re-coating of the Co-operative can be seen above right where the silver colour has been retained in a perfectly smooth finish. This re-spray will protect the roller shutter for many years to come which saves having to fork out for a replacement. 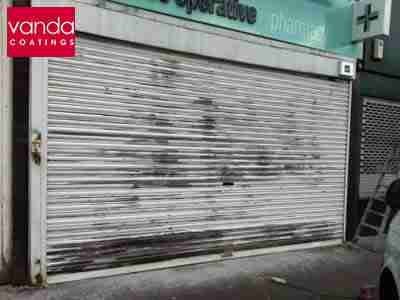 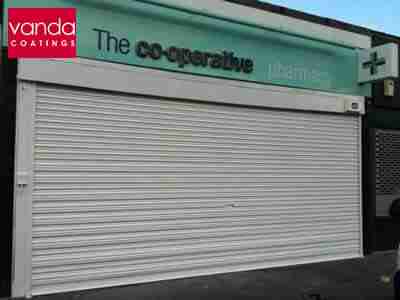