New Look is a popular high street chain specialising in fashionable clothing and accessories with over 1000 stores in many countries. Vanda Coatings have spray painted the ceilings of 36 New Look stores all over the UK from Sheffield to Stevenage.

The Oxford Street store in London was different from the other New Look outlets we worked on in that we re-coated their escalator. This was shown with striking effect in the background of the photos of Kelly Brook opening this flagship store in November 2012.

About 9 out of 10 of the New Looks we sprayed were live, so almost all of the work we did took place out of hours in order to allow the shops to continue trading. Depending on the store and the arrangements, our teams or New Look staff moved the stock out of the way before work commenced. If the New Look was in a mall and the spraying took place overnight, then the stock could be moved out into the mall, so that the whole shop was empty without the problem of having to find extra storage space inside.

Because our Vanda Coatings teams are experienced, a crew of 3 people normally prepared, sprayed the ceiling and de-masked within the allotted 8 hours. As is often the case, preparation took most of the time and mainly consisted of masking up to protect adjacent surfaces from overspray. Before spraying, everything is always masked including lights, speakers, air conditioning units, sprinklers and smoke detectors.

Most of the New Look ceilings we sprayed were mineral fibre and the sizes ranged from 300 to 800 metres squared. Many ceilings were tegular which consists of tiles sitting on a grid and a four way coating was necessary, so that the surface was coated when viewed from any angle.

Almost all of the New Look ceilings were sprayed by one of our team leaders, John who has a vast amount of experience when it comes to spraying ceilings. John is adept at using stilts, but there are safety issues to consider. If there is paint on floors they can get very slippery, so he often favoured spraying ceilings with a pole (also called a lance).

During re-coating, the team normally de-masked the lights as they sprayed. It was then easier to see especially as New Look ceilings were painted a dark grey which absorbed light and hindered vision. Because lights are different shapes, they also had to be sprayed four ways and once they were de-masked, any misses could be detected and then coated.

Generally, the Vanda teams let everything settle for about half an hour before de-masking everything else. There is always dust from the various aspects of refit work, so usually there is vacuuming to be done. Often, other trades such as chippies were on site and they usually had to stop work while the ceilings were being sprayed, so the sooner the clearing up was done, the sooner everyone could get on with the rest of the re-fitting work. John says one of the great things about this type of work is that other trades are almost always willing to work together and working effectively alongside other people is always part of our remit.

Once all the work was completed, New Look staff moved the stock back to where they wanted it and the stores were ready to open at the normal time. 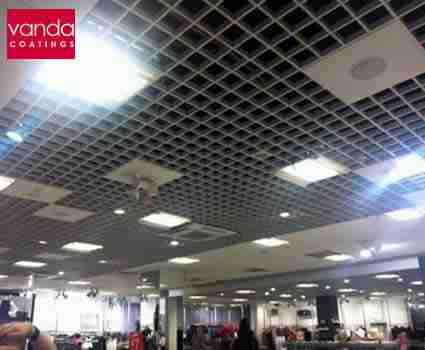