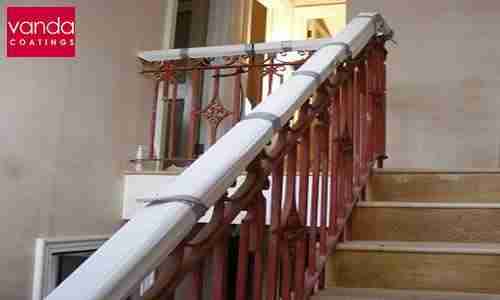 The wide variety of projects we undertake at Vanda Coatings range from recoating warehouses to shopfronts for designer labels. This case involved refurbishing balustrades in Notting Hill which entailed spraying a staircase inside a £5 million house that was undergoing a £15 million conversion. The internal, central staircase spanned 5 storeys and our professionals were responsible for recoating all of the balustrading. This was made of intricate metalwork, so it needed a similar electrostatic technique used to paint fences.

Our team carried out the project while other areas of the house were being refurbished. Consequently, it was a building site with a great number of other trades carrying out work on the premises. These included labourers, decorators, electricians, joiners, kitchen fitters and cleaners inside plus builders working on the exterior. The staircase was relatively narrow, so there wasn’t a great deal of room to allow the large numbers of workers movement up and down the stairs. Our teams were constantly disrupted, but this is to be expected when working alongside many different trades.

Initially, the Vanda operatives laid plastic over the doorways leading off the staircase in order to prevent dust and overspray from coating the doors and frames as well as the rooms themselves. One of the issues was that other trades needed access into these interiors, so the plastic had to be broken or taken down and then replaced for our work to carry on. The hours were very long partly because of the disruption, but also because the foreman had to time table the various trades according to a tight schedule. For the Vanda team, this meant their work had to be completed before the cleaners were due to come in.

After the plastic had been readjusted, the wooden bannisters and the steps were masked. The company who contracted us to do the work, Fabricari masked the walls before we came on site. This was a complex task in itself because a specialist tape had to be sourced, so the coloured plaster would not get damaged. This was crucial as the walls had been covered in a specialist plaster with pigment mixed in before it was applied which cost £140 per square metre. Because it was still damp the plastic kept on falling off, but a stickier tape couldn’t be used for fear of damaging this extremely expensive surface. This did slow all of the work down a little, but our team were willing to work long hours and do whatever it took to get the project finished in time.

The bannisters had been hand painted on the ground floor before our Vanda professionals started working on the staircase, but the previous trades had stopped using this old fashioned method because the finish wasn’t of a high enough quality. Spray applying paint always gives a superior finish. The rest of the bannister was coated in red lead right up to the fifth floor. Lead oxide (triplumbic tetroxide) is an orangey-red pigment used in primers to protect metal against corrosion.

The metal balustrading was sanded down by hand because it was too intricate for a machine. The substrate was then wiped down with cleaning solution. Sometimes thinners are used to degrease surfaces, but in this case they could have taken off some of the red lead, so panel wipe was used instead. At least 6 coats of black top coat were needed because the red colour of the red lead was so strong. About 90% of this spraying was electrostatic, but some of the surfaces that were too intricate and tucked in needed the HVLP technique. An HVLP gun sprays with a little more power than the electrostatic method, so the coating is forced into very hard to reach places. An experienced sprayer will know when to use which method and this knowledge paid off when refurbishing these balustrades in Notting Hill because we received an email thanking us for the high standard of work. 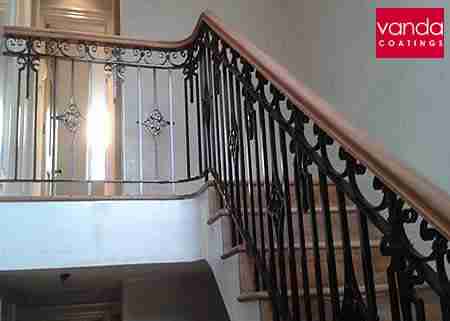