Recoating of Existing Metal Cladding at Nissan in Bedfordshire

Over the years we have refurbished many dealerships across the UK and this work has included curtain walling, entrances with canopies and staircases. When it came to the recoating of existing metal cladding at Nissan in Bedfordshire, it wasn’t the showroom that needed overhauling, it was the warehouse that housed the mechanics area that was re-sprayed.

The construction project involved putting in the hydraulic lifts for the mechanics to work on the Nissan vehicles, so there were also pipe fitters installing high pressure air lines for the hydraulic systems. The Vanda Team Leader effectively organise shifts around other trades by dividing up the large warehouse into sections and individual areas were completed one at a time. The building was also full of large mechanical equipment (as can be seen in the bottom right photo) and some building materials which had to be moved out of the way while our sprayers worked.

The Nissan property was at least thirty years old and in an extremely dirty, greasy condition. Consequently, the most time consuming aspect of the project was cleaning rather than the masking which usually takes the longest amount of time. Initially, the surface had to be treated before it could be re-coated. This meant giving it a chemical clean in order to de-grease it.

Then about 20 sky lights were masked up before painting the ceiling. For this task, a cherry picker and scissor lift had to be used because our team were working at a height of up to 15 metres. All our operatives are trained to work at height and have the appropriate IPAF (International Powered Access Federation) certificates. Because the walls had a plastic layer of cladding on them, a bonding primer was used after all the de-greasing and masking had been carried out.

Our Vanda professionals finished off recoating the existing metal cladding at Nissan in Bedfordshire with a grease-resistant top coat in a brilliant white. The top right photo shows this re-painting of the cladding in progress. 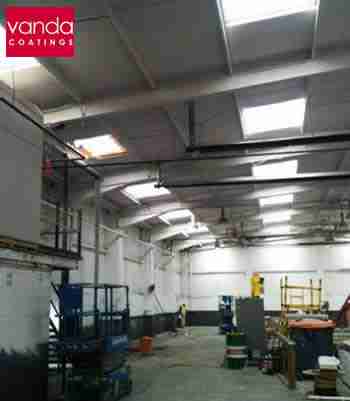 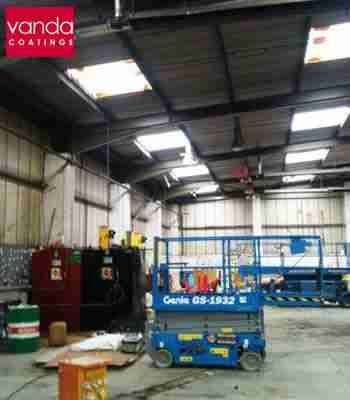