Many business owners refurbish the entrances to their commercial properties because they know that first impressions count. This is why Vanda Coatings were asked to re-spray the front entrance of this building in Salford Quays, but the client knew that other metal architectural features were letting the building down. Consequently, painting all the metal fire exit doors was included in this refurbishment programme because they were in a particularly bad state and needed revamping.

The metal fire exit doors had been hand painted which never results in as good a finish as spray applying paint. Furthermore, there were stickers on these surfaces which stripped off patches of the old paint when they were removed leaving blotches of bare metal as can be seen in the bottom photo. Sometimes vinyl can be removed from painted metal without damaging the original coating, but in this case the paint had failed and was very flaky.

First, the doors had to be mechanically sanded down which was time consuming because they had been hand-painted and were not in good condition. Before the top coat was sprayed on, the metal fire exit doors were primed with barcoat which is specifically designed for hand painted surfaces. This is a specialist sealer that prevents any original paint from reacting with the top coat.

Unlike the fire exit doors, the surface of the entranceway was in fairly good condition in a blue colour to be re-sprayed in grey. The entranceway was sanded down, degreased and then adjacent areas were masked off to prevent them from any overspray.

Next our Vanda team spray-applied four layers of top coat in the chosen grey. A tower and a picker were used for some of the work because the entrance was 6m high. Our team also re-coated two columns that supported the canopy overhanging the entranceway. Electricians, joiners and general building trades were on site, so our operatives worked around them effectively.

This commercial building was occupied by an IT firm and was able to remain live because the refurbishment took place a level at a time. Therefore, some of the work could be carried out while the business continued to operate, but the front entrance turret had to be re-coated out of hours because it provided the only access to the first floor.

There are always constraints when re-coating architectural metal, but our Vanda teams are used to this. Spraying the entrance way as well as painting the metal fire exit doors was completed successfully and an example can be seen in the top photo. The client was pleased with the standard of our work and consequently, we have had repeated requests for quotes. 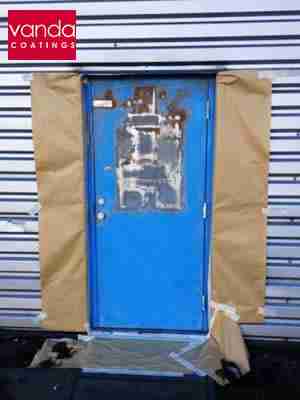 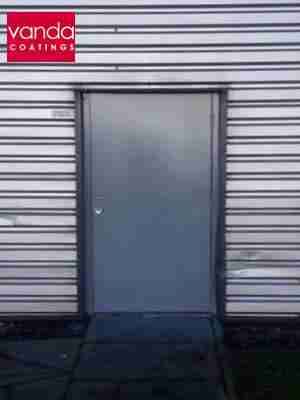