When this large office building was being converted into apartments, Vanda Coatings re-coated all the exterior and interior windows before painting the metal balustrade in St. Albans. A curved staircase spanning two levels had to be refurbished and this project took place out of hours, so as not to hinder the work of other trades who could only work during the day. Vanda Coatings often schedule re-sprays to take place throughout the night or at weekends when buildings are closed. This is so businesses can carry on operating as normal without their working day being disrupted.

Our Vanda team worked through nights to transform this dull stairway from a creamy beige colour (as can be seen in the photo at the bottom of the page) to the brilliant white shown in the top right photo. Initially, the handrails had to be abraded right back in order to remove most of the existing paint. Any coating left on was feathered out, so that subsequent layers of primer and top coats would go on smoothly. Next, the surfaces were washed down as any dirt would have prevented the fresh paint from sticking.

The masking process didn’t have to be as extensive as usual because there wasn’t any carpet on the stairs as can be seen from the photo at the bottom. After masking up, primer was spray applied on to the bare aluminium (where the paint had been removed). This protects the metal as well as providing a key for the top coat to stick to it.

A tack cloth was used to get rid of any dust particles left on the surface as these would mar the finish. Finally, the staircase was electrostatically sprayed which was the most appropriate technique for painting this metal balustrade in St. Albans because the spindles were cylindrical. The wrap around effect of paint to surface is an advantage when spraying using an electrostatic spray gun. It means that hard to reach areas can be coated more quickly than other methods when paint spraying a staircase. 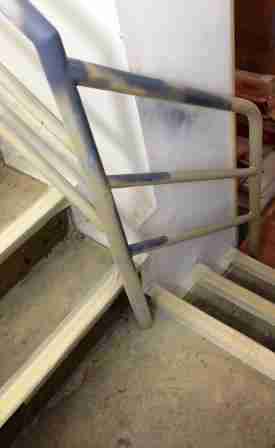 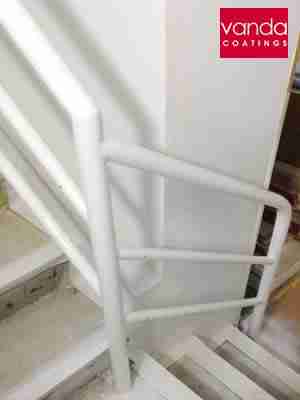