Sometimes a variety of architectural features need re-coating and even though we specialise in re-spraying metal, we recently completed a project involving paint spraying UPVC in Manchester. This student accommodation block we re-sprayed contained apartments each with four bedrooms and a kitchen. All in all our Vanda teams re-sprayed over one hundred UPVC windows and doors, two sets of double doors, a fire exit door at the rear of Mansion House and some cladding.

The UPVC was originally red on all the exterior frames and the reveals were white. Reveals are the surrounding surfaces between walls and frames (including the ledge) that line the inside of windows and doors. The client wanted both to be the same colour grey, so there would be uniformity in terms of colour whether the windows were open or shut. Most of the paint spraying of Mansion House in Manchester was completed before the students moved in and the first week of work involved spraying the reveals of the windows.

Our team leader had a course of action planned based on experience of painting a vast number of items in a large building. He maintains that preparation is the most vital stage of the paint spraying process, so used the master key to gain access inside in order to mask off the walls, floors and other items. The Vanda operatives built a little tent around the inside of each of the windows, so that overspray and paint fumes wouldn’t go into the rooms. Then the windows were opened and sprayed from the outside into the reveals.

The re-sprayed windows were left open for a while, so they could dry out. Paint sweats when it’s drying and if shut too soon, the tacky paint would have created a seal which could have prevented the windows from opening. When the students were back, the reveals had all been completed, so the next stage was to re-coat the exterior of all the windows and this could be accomplished while they were shut. It wasn’t easy to gain access as each student had to be contacted and this liaising was coordinated by our team leader.

The process for each window and door was to start by rubbing them down in order to create a key to enable subsequent coats to stick. They were then cleaned down. After this, surfaces close by were inched up (which means masking tape an inch wide was placed over intricate edges that were not to be coated). Larger areas were masked off following the inching up and then the UPVC was re-sprayed. All of this work was carried out using a purpose built scaffold for which all our employees are trained to use. Each operative and team leader have IPAF and PASMA certificates for working at height.

Towards the end of the project a second Vanda team were brought in to lend a hand as the client wanted the work finished earlier. We will always try to find ways to help clients and this project involving paint spraying UPVC in Manchester was no different. 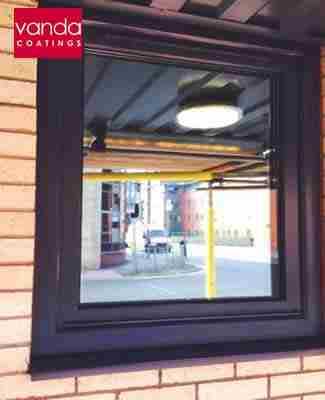