Office Refurbishment in the East Midlands

An office block near East Midand’s airport had once been a base for BMI Baby and the lease was being taken over by a financial company. This company was sharing the £2 million cost of refurbishment with the owners of the property in order to transform it into a high spec call centre. Consequently, other trades were working on the interior according to the directions of the Interior Designers while our Vanda operatives were busy transforming the exterior.

The extensive project involved re-spraying all the fire exit doors, approximately 150 windows including the reveals as well as the fascia around the whole perimeter of the building which was a large expanse. None of these items had been refurbished before, so with a vast amount of experience, Vanda were the ideal candidates for this renovation.

The original coating had been put on the metal surfaces around 1992 when the building had been built and the once smart navy blue had since faded, so now the commercial premises looked dreary. The soffit and fascia also needed revamping as the original manufacturer’s white coating was no longer ‘brilliant’ after such a long time of weathering. A fresh coating can make architectural features look like new which rejuvenates the whole building and is an inexpensive solution to an exterior that has seen better days.

Good organisational skills are paramount in any project and our proficient employees have found that when it comes to large assignments it is best to divide the workload up into sections. The team leader would estimate how much work could be completed in a shift and all the preparation as well as the re-spraying would be accomplished within the allocated section.

The division of large expanses on the various facades was decided upon after liaising with the foreman. This was to ensure that any elevations chosen weren’t going to be disturbed by a cement mixer coming on to the site for example. It takes skill to accurately work out what can be achieved within a certain time frame and our team leaders have years of experience to their advantage.

In the case of painting the office windows, a section usually contained at least 10 windows in each shift, so the appropriate amount of paint would be mixed and all the frames in that particular section would be stripped, masked up, re-coated and de-masked within that one shift. If the allocated amount of work was completed more quickly than estimated then another couple of windows could be rubbed down to give the team a head start the next day. It also meant time could be made up if bad weather delayed progress.

Preparing the Windows and Fascias

The previously powder coated windows were rubbed down first then areas not intended to be painted were protected with masking sheeting and tape. If surfaces are masked off before abrading them, then the masking that has been put on could get caught and be pulled off. All the glass and the full surround was protected then the surfaces were de-greased with thinners after masking.

As with the windows, the fascia was divided up into sections with the preparation and re-coating being completed one section at a time. When it came to working on the fascias and soffits sections, the first stage was masking off the brickwork and guttering followed by applying a layer of protega bond coat to the fascia. These surfaces didn’t need rubbing down because there was a rippled effect on the fascia and these indentations served as a key. A keyed substrate is necessary for the top coat to adhere to it. Once the bond coat had dried, a specialist paint for this particular substrate was used.

Since much of the metal was at height, a cherry picker was vital and all our Vanda employees are highly trained with IPAF certificates. 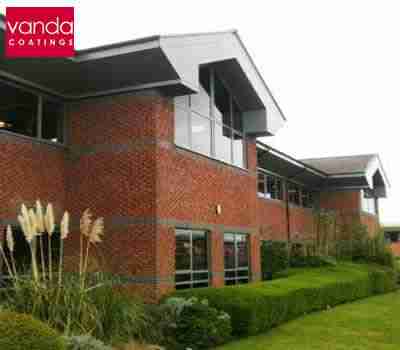 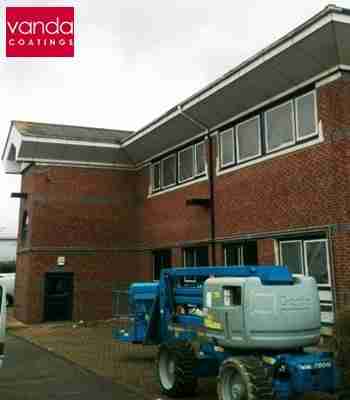