Boundary House, a fairly large, vacant office block in Cheadle, Staffordshire was being rented out again. This entailed a cost of £165,000 to restore the building back to a standard high enough for use. Part of this whole restoration project involved refurbishment of the office façade which consisted of re-spraying the architectural metalwork. The original green colour had faded and the owners decided that a contemporary grey would modernise the whole elevation as can be seen from the top photo. All in all the entire front entranceway, panelling and front guttering was re-sprayed as well as four other access doors around the building.

The commercial property was not live as it was not ready for rental, so work on the project could take place at any time. Nevertheless other trades were on site which included electricians, plumbers, joiners, general builders and people installing air conditioning. All these trades had to work side by side which our teams at Vanda Coatings are used to doing.

The first task was to remove the vinyl signage from the front of the revolving doors using a heat lamp. In order to key the surfaces, all the metal framework was rubbed down then degreased and adjacent areas were masked off where required. Because the building was three stories high, a Z60 cherry picker was used for working at height as can be seen from the bottom photo. All our operatives have PASMA and IPAF certificates and are experienced in working high up, safely.

The top coats were spray applied onto the frames using an HVLP (High Volume Low Pressure) gunwhereas an airless sprayer with a different specialist paint was used for all the panels. One of the advantages of using an airless gun is that a smooth, glossier finish is easier to achieve than when using other systems. This is because an airless has a wider fan of spray, so there are fewer overlapping areas.

The client was happy with our office façade refurbishment, so Vanda Coatings were asked to carry out extra work, namely the internal entrance doors were re-coated in white to match their surroundings. 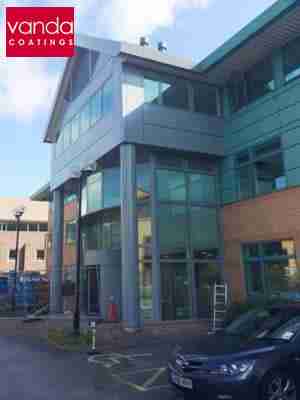 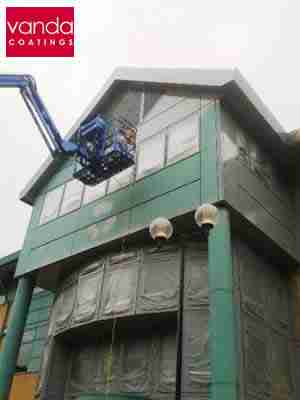