Bristol harbour has been in operation since the 13th Century, but has obviously changed radically since then. This versatile gateway into Bristol is known as a floating harbour because the water level is not affected by the tide due to specially designed lock gates built in the 19th Century. The Welsh Back part of Bristol harbour was so named because this waterway was utilised extensively by trows carrying cargoes from Wales including slate and coal.

Buildings on Bristol waterfront have always been sought after, but the owner of the offices shown in the photo top right realised that location wasn’t enough to attract new tenants. The curtain walling looked a little worse for wear and needed spraying to update it. The appearance of any building can be vastly improved by re-spraying the windows, so that they look as good as new, but at a fraction of the price.

Vanda Coatings was called in to re-spray the curtain walling in this popular, but tricky location. The whole building had to be scaffolded out which was a complex procedure because the building is right on the waterfront as well as next to a busy road. Furthermore, the Vanda teams worked around the needs of the businesses in the building, so they could continue operating as normal. This meant working weekends as well as during the week. We are proficient at re-spraying curtain walling in live environments for minimal disruption.

The curtain walling was sprayed from a jaded blue to a modern grey which transformed the appearance of the building giving it even more of a contemporary feel as can be seen from the bottom right photo. 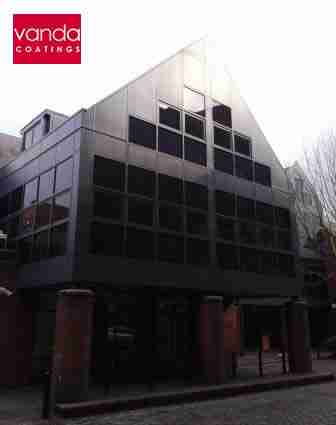 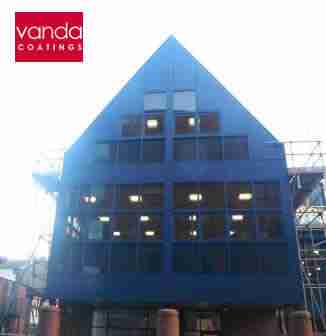