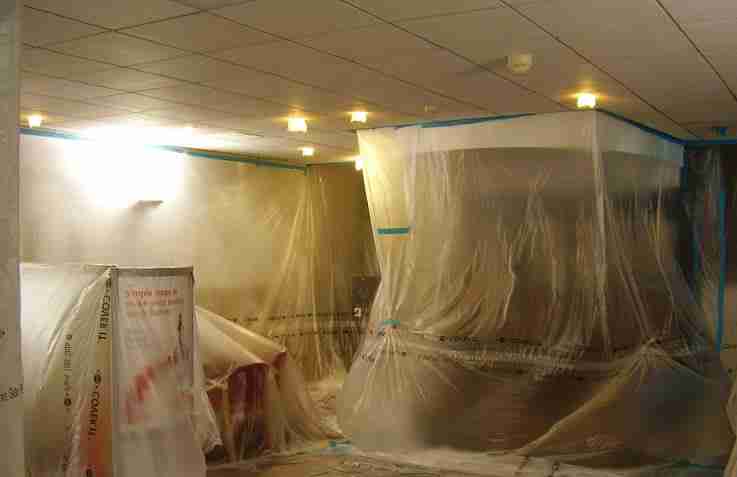 Underneath internal roofs, ceiling voids that contain ducting, cables and pipes may be hidden by a suspended ceiling, also known as a false or dropped ceiling. Dropped ceilings are known to have been fitted in Japan as early as the fourteenth century and there is a long history of false ceilings being built for acoustic reasons too. Nowadays, when it comes to the installation of suspended ceilings, these reasons are still applicable. We spend a great deal of time under ceilings, so it is important that they function well. Because replacing them is wrought with difficulties, refurbishment is a wise choice and ceiling tile restoration can be achieved easily.

A suspended ceiling usually consists of a grid which is attached to the internal roof structure with wires. This grid locks together into a cell pattern and each cell is filled with a tile which can be removed for easy access to the mechanisms above. Tiles are manufactured in a variety of materials, but metal pan and mineral fibre are common in commercial buildings.

As ceiling tiles get older, they become discoloured and stained with dust, mould, grease and carbon emissions from HVAC (Heating, Ventilation and Air Conditioning) as well as other pollutants. Even though smoking is now illegal in the workplace, older interiors may have suffered smoke damage from before the ban and a yellowed ceiling that was once white is not attractive. These ceilings not only look dull, they are not as reflective. Consequently, rooms are not as light as they would be with a fresh coat of paint and of course, this can have a knock on effect on productivity.

Furthermore, a dull ceiling increases energy consumption with the need for more lighting which impacts on the environment. Unfortunately, replacing a ceiling has even more of a negative effect. Discarding the tiles and metal grid into landfills when they could be refurbished is a waste so recycling the existing materials is surely a better option.

A fresh coat of paint means a greater amount of light is reflected (if tiles are re-coated in a pale colour) and reduces the need for artificial light. White is often chosen for ceilings in order to reflect as much light as possible, but it is worth remembering that tiles can be painted in any colour to match a brand or simply for a change. Both the gridwork, vents, ductwork, speaker plates and the tiles themselves can be painted and once re-sprayed, the tiles will not stick to the t-bar system on the grid.

Ceiling tiles can be restored in all sorts of commercial and public buildings including retail outlets, restaurants, offices, educational buildings and in the healthcare sector. Restoring ceiling tiles also disinfects and deodorises them which is especially important in hospitals and eating establishments. Usually, re-coating can be completed in a live situation, so even products in a supermarket need not be removed.

What is involved in Re-Spraying Ceiling Tiles?

An experienced ceiling paint spraying company will cover walls, floors, furniture, stock and anything else that shouldn’t be painted with polythene sheets. Smoke detectors, sprinklers, speakers and lights will be masked off to protect them. Depending on the height of the room and how much clear space there is, a sprayer will use either an access tower, ladders, a lance or even stilts to restore ceiling tiles (though not if the floor becomes too slippery).

A knowledgeable ceiling paint sprayer will know that suspended ceilings should usually be painted from four different angles to ensure total coverage. This is particularly important when re-coating tegular ceilings where the tiles sit on rectangular grids.

This whole process of resurfacing can take place off-hours when a building has been vacated for the night whereas in order to replace a suspended ceiling, the whole area would be out of use for quite a time.

Money is saved by restoring tiles rather than replacing them.
Re-spraying is much more environmentally friendly than replacing the tiles.
The acoustic properties are not affected.
Class ‘O’ fire rating is still preserved.
Ceiling life is extended.
There is a minimal disruption to businesses.
There is no mess.
There are no lingering odours.
Coatings are available in any possible colour.
Ceilings, walls and furniture are not damaged.
Ceiling tile restoration improves the aesthetics of the whole interior.