Car dealership spraying is a specialty service offered by Vanda Coatings and many UK car companies including Mini Stratstone in Harrogate request our expertise. The Mini has an important place in the history of car design and we were happy to play our part in the upkeep of the Harrogate showroom.

The original Mini designed by Sir Alec Issigonis for the British Motor Corporation is a 1960’s style icon and has influenced car manufacturers ever since. It is a continuing success story in terms of rallying as well as a popular car for a wide range of people who enjoy the retro cool image.

In 1995 Autocar magazine voted the Mini the Car of the Century and a year later Classic & Sports Car magazine cited the Mini as Number One Classic Car of All Time. In 1999 this economy car was deemed the 2nd most influential vehicle of the last century worldwide, so the Mini has certainly been revered.

Dealerships need to be well designed like the cars they house with a high standard of maintenance and Mini Stratstone in Harrogate was no exception. Vanda Coatings sprayed the whole showroom over a period of 6 days which included the front entrance, concertina doors at the front, sliding doors (used to move Minis in and out of the showroom) and window frames.

Craig the team leader along with Paul and Chris all worked together on the whole project because they are experienced, so that meant that each team member took part in the preparation, spraying and de-masking. Mini Stratstone was live while the team focused on the columns at the front the building and the business was shut whilst work took place on the interior. There were no cars inside at this point as a new floor was being laid and the Vanda team worked easily around other trades.

The metal substrate was last sprayed many years ago, so the framework wasn’t in a good condition. Craig said it took 2 solid days to abrade the surfaces using mechanical sanders. This was followed by applying Bar Coat which is a sealant that stops the surface from reacting to coatings and prevents peeling. A top coat can usually be sprayed on just under an hour after Bar Coat has been applied, but the Vanda team left this layer to dry overnight for good measure.

A total of 4 layers of top coat were spray applied and Mini Stratstone in Harrogate was so large that by the time our team had finished spraying the car dealership at one end of the showroom, the other end had dried, so they could spray on the next layer straight away.

The final stage of car dealership spraying is de-masking and clearing away any rubbish, so after this phase Mini Stratstone in Harrogate was ready for business with a showroom that looked as good as new to mirror the iconic cars for sale there. 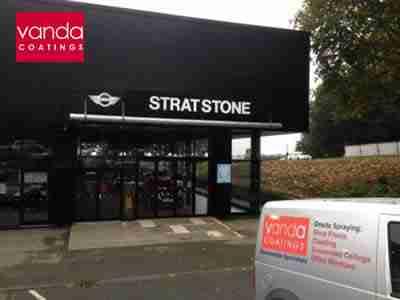 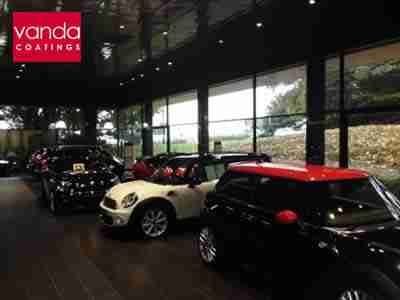