Aluminium window painting took place recently in Berkshire. The Enterprise Centre in Bracknell is a large brick and block commercial unit on an industrial estate that was recently converted into offices. This entailed the whole building being gutted and then refurbished, so there were all sorts of other trades involved in the project. As is often the case our teams at Vanda Coatings were called on to work effectively alongside ceiling fitters, plumbers, tillers and a multitude of other trades.

All in all 5 Vanda operatives worked on the aluminium window painting both externally and internally on 2 of the floors. This was no mean feat. There were 35 windows on the top floor alone and 5 bays on the ground floor with 3 windows in each bay. As with many office buildings one colour was chosen for the exterior and another for the interior. In the case of the Enterprise Centre the aluminium windows on the exterior of the building were painted a sleek grey whereas the internal window frames went from yellow to a clean white.

Other internal re-spraying included a staircase which was spruced up by recoating under the stairs in a brilliant white. The interior side of the roller shutter was also re-coated in white to match the pristine timelessness of the stairs with the outside re-sprayed in grey to complement the exterior of the window frames.

A re-spray by Vanda Coatings isn’t just requested in order to change the colour of items, sometimes surfaces need to be re-coated in the original colour simply to freshen them up as often an old coating can fade and paint can chip. In the case of the veneer finished wood cupboard doors, the white had become dirty looking, so they were revitalised with a coat of the same brilliant colour.

Our father and son team, Grant and Jo started off this extensive aluminium window painting in the Enterprise Centre over the first 2 weeks and Jo and Jac worked on the site in the final fortnight. Craig was also called in to spray the staircase handrails electrostatically in black. He is considered to be the most experienced electrostatic paint sprayer in the whole of the UK and has successfully trained all of our electrostatic operatives, so the level of workmanship is always high. 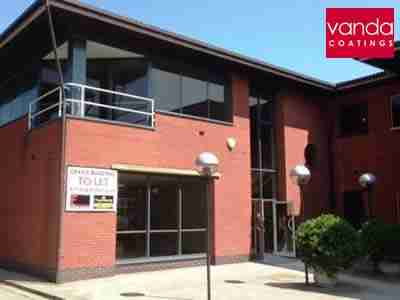 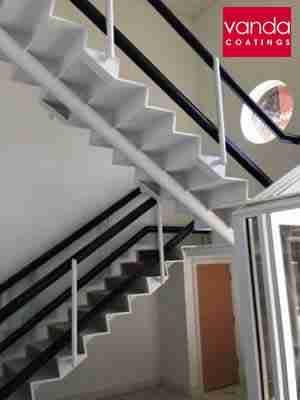